To the west of the Burgos province, we find a moorland dedicated mainly to the cultivation of cereal. Lands that extend from the heights of La Lora and the limestone mass of Peña Amaya, already at the limits of the Cantabrian Mountains, to the Arlanza valley, entering the land of Campos in Palencia. You can find the greatness of the Gothic and Renaissance monuments in typically Castilian towns with a small number of inhabitants.

Lands crossed by the Camino de Santiago, where the landscape invites the pilgrim to reflection and inner search.

This town located about 38 kilometres northwest of the city of Burgos was founded, according to tradition, by Count Don Diego Rodríguez Porcelos, Lord of Amaya, in the 9th century, some years before he himself undertook the great work of the foundation or repopulation of Burgos by mandate of King Alphonse III, the Great, around the year 884.

Villadiego welcomed a rich and prosperous Jewish community located between the gates of the Arch of the Prison and that of the Nuns, in the place where the Augustinian monastery of Saint Michael of the Angels currently stands.

Castrojeriz has its origin at the top of the hill, on which the castle sits, from which it receives the nickname of Castro. Excavations at the top of it have revealed its occupation from the Bronze Age, about 1,500 years ago BC, until the Middle Ages.

It is one of the enclaves with the greatest cultural and artistic richness on the Camino de Santiago (Way to Sanit James), which crosses the town longitudinally for more than 1,500 meters, which makes it one of the longest urban crossings on the Jacobean route.

The town is declared a Historic Site and among its Assets of Cultural Interest are the Castle, the House called “The fort”, the Tower, the Church of Saint John, Church of Saint Dominique, Collegiate Church of our Lady of “el Manzano”, the Monastery of Sainte Claire and the convent of Saint Anton.

Considered of Celtic origin, in the 1st century BC it was inhabited by the Turmogos, a Celtiberian people, who spread through the central area of ​​the current province of Burgos, being known at that time as Segisamone, which meant “the strongest.” In Sasamón a Roman legion (Legio IV Macedónica) settled under the command of Octavio Augusto, who tried to subdue the Cantabrian and Asturian peoples and Romanize the region. There are two Roman bridges over the Brullés river, both located on the outskirts of the urban area (Trisla and Saint Michael).

The urban fabric preserves an abundant number of manor houses, such as the Valtierra and Villega houses. Also noteworthy within the civil architecture is the entrance arch to the town, some remains of the wall, the Main Square, the Municipal Pictorial Museum, the Cambija fountain and the Salaguti House Museum.

With regard to religious architecture, the Church of Sainte Mary Royal stands out, whose façade at the southern end of the transept is one of the most beautiful of the 13th century Gothic in Burgos and where we find works from the 15th and 16th centuries made by the most prominent artists of the time, Simón de Colonia, Felipe Vigarny, Diego de Siloé, Simón de Berrieza and Domingo de Amberes.

In the Hermitage of San Isidro, located on the outskirts of the town, there is a 15th century humiliate cross, one of the best artistic quality in Spain. 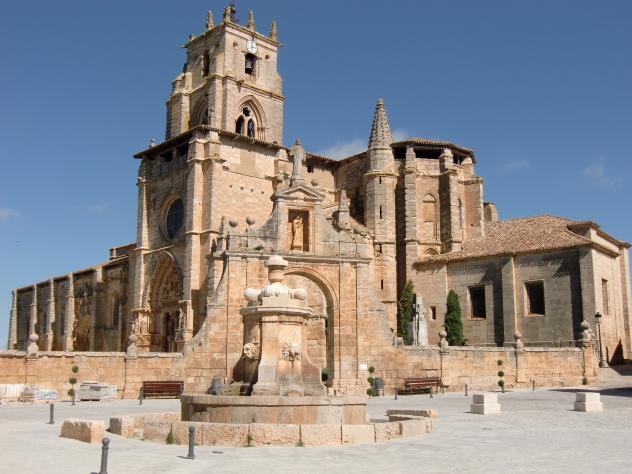