The austerity of its exterior appearance, due to the fact that it was included in the city wall, does not allow to guess the beauty and richness of its interior, which has a splendid Gothic ensemble, the most important in the city after the Cathedral.

The first phase of the temple takes place in the thirteenth century, but it will be in the fifteenth and sixteenth centuries, when the city lives its time of splendour, when the second and final remodelling is carried out. At this time, magnificent burial chapels were built in which artists such as the Colonia, Juan de Vallejo, Felipe Vigarny, Gil and Diego de Siloé participated. 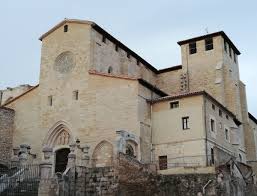